Where are millennials getting married?

As a generation, millennials are pushing back many big life decisions, including marriage. However, millennials in these cities are marrying at rates far above the national average.

There are many reasons why millennials are delaying marriage. For example, cohabitation has become more socially acceptable among millennials than among previous generations. Today, 15 percent of adults ages 25-34 currently live with an unmarried partner. In addition, many of these young adults suffer from a lack of economic security, driven by underemployment and lower incomes resulting from the aftermath of the Great Recession. It’s understandable that millennials want to be on firmer financial ground before committing to a marriage. The hesitation to tie the knot, though, has contributed to a widening socioeconomic gap among married and unmarried households. 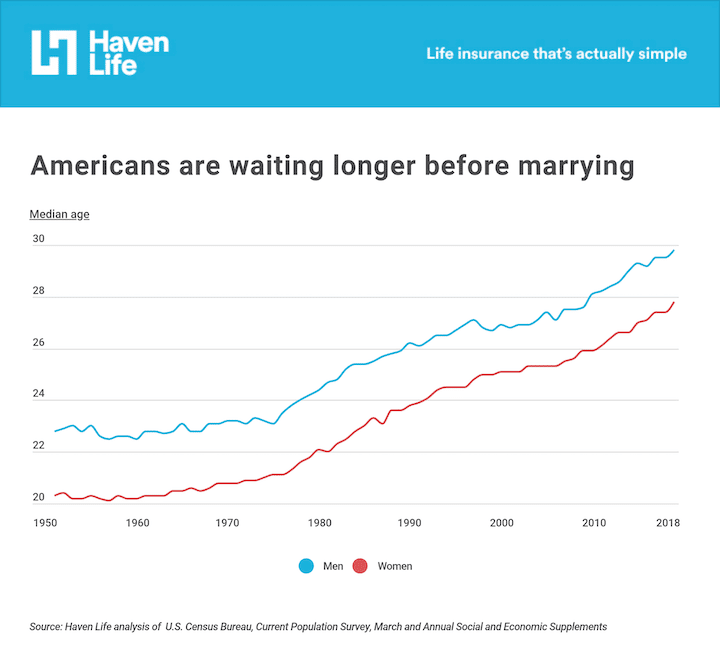 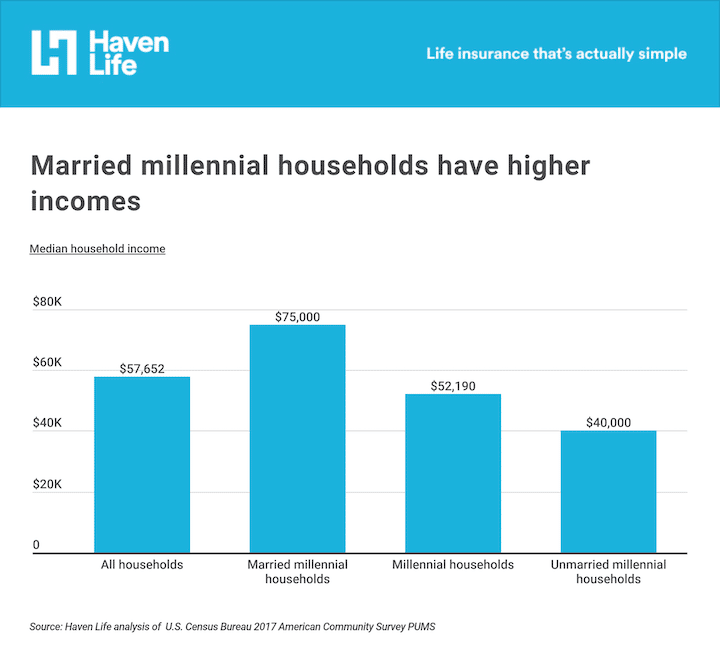 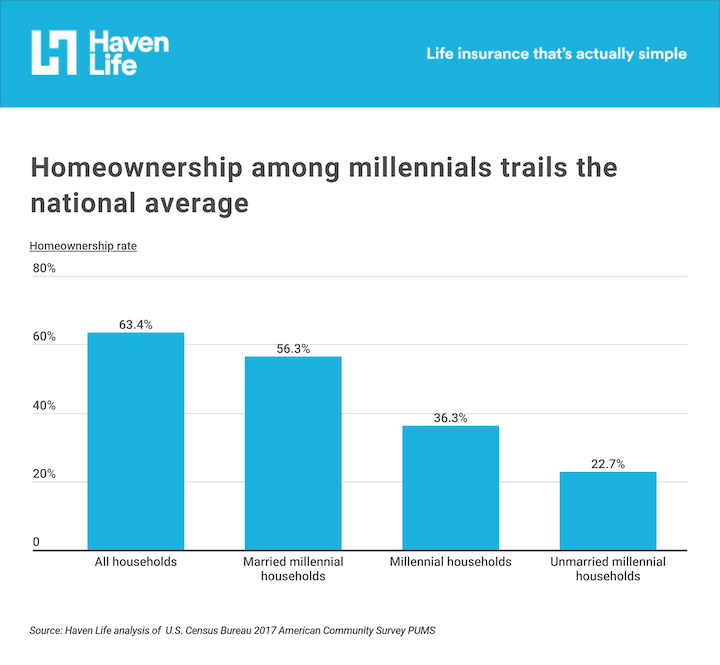 Similar to wealth and homeownership, marriage rates skew higher among the highly educated. According to Pew Research, as of 2015, 65 percent of college-educated adults over the age of 25 were married, significantly higher than the 50 percent marriage rate among those with a high school education. By contrast, in 1990 the marriage rate was above 60 percent for both of these groups.

Nationwide, 32.9 percent of all millennials are currently married. However, in certain cities, the millennial marriage rate significantly outpaces the generation’s average. To identify these cities, researchers at life insurance agency Haven Life analyzed data from the U.S. Census Bureau American Community Survey. For each metropolitan area—grouped into large, midsize, and small metros based on population—Haven Life, an online life insurance agency that sells term life insurance, looked at marriage rates, homeownership, income, and the proportion of households with kids. Here’s what they found:

San Jose is located in the heart of Silicon Valley, where jobs in technology and engineering are plentiful. The city has multiple public transportation options too, which makes for easy commuting. San Jose has the highest median income on this list, with married millennial households earning $132,769 per year. Only a third of married millennials in San Jose own a home though—a result of skyrocketing housing prices in the area.

Drawing from its history as a Southern industrial city, Birmingham’s largest economic sectors are in metals manufacturing, automotive, and IT instruments. Millennial families can spend their weekends visiting the botanical gardens, the zoo, and Railroad Park. The city’s youthful feel is augmented by the University of Alabama’s thriving Birmingham campus. Birmingham also hosts the Southeastern Conference for college athletics. Over two-thirds of married millennials have kids.

Minneapolis and St. Paul are located in close proximity to each other, offering ample opportunities for employment, housing, and entertainment. Families can visit the Mall of America, the walkways along the Mississippi River, or one of the many parks scattered around the region. Bundle up, though—the Twin Cities are known for cold winters and high levels of snowfall. The 70.1 percent homeownership rate for married millennials is higher than both the national homeownership rate for married millennials and the national homeownership rate overall.

Nestled east of the Rocky Mountains, Denver offers an ideal combination of urban comfort and outdoor recreation. Due to its position as a major transportation hub and a city rich in natural resources, Denver has employment opportunities in fields such as aviation, aerospace, mining, and energy. Outside of the office, residents can attend games at Broncos Stadium, walk through one of the city’s numerous parks, or visit an art gallery or museum.

The Houston metropolitan area is the most populous in Texas and home to the Texas Medical System, Hewlett Packard, and AT&T. Major industries in the area include energy, advanced manufacturing, digital technology, and biotechnology. Within Houston, residents can explore the many attractions in the Museum District and the Theater District. Nearby Galveston Bay also offers access to the water and a pleasant escape from city life.

The greater Seattle area offers a variety of job opportunities for millennials, especially in the tech sector. Several large companies, including Starbucks, Amazon, and Microsoft, are based in Seattle. Seattle is also surrounded by the natural beauty of the Cascade and Olympic Mountains, which are perfect for hiking. The median income of married millennials is $94,699, and households can keep more of that money since Washington state has no income tax.

Nashville is a major hub for live music, outdoor festivals, and millennials, too. The metro area is home to a millennial population of 456,081, about 25 percent of the overall population. The greater Nashville region hosts more than 40,000 businesses and offers a wide array of job opportunities in fields like education, healthcare, and automotive. Nashville residents can visit performing arts centers like the Grand Ole Opry, art museums like the Frist Center for Visual Arts, and music institutions like the Johnny Cash Museum.

The Dallas-Fort Worth metro area is one of the major economic hubs in Texas. Due to its high concentration of technology firms, this region is often referred to as Silicon Prairie or the Telecom Corridor. Tourism is another popular industry in Dallas-Fort Worth, which is great news for both employment prospects and finding things to do. Residents can visit art galleries, state fairs, and major sporting events.  At 1,610,861, Dallas has the highest millennial population of all metropolitan areas on this list.

Grand Rapids has the smallest millennial population on this list, at 211,559. Major industries include manufacturing, trade, education, and health services. More specifically, Grand Rapids is also known as “Furniture City” due to its high production of furniture. This charming Midwest city combines the benefits of living in a big city with the community-oriented atmosphere of a suburb. Grand Rapids also has the highest homeownership rate on this list, with 74.3 percent of married millennials owning their own home.

Simple financial moves all parents should check off their to-do list.

The Kansas City metro area spans the Kansas-Missouri border. It is also located at the intersection of two major water systems: the Missouri River and the Kansas River. The federal government is one of Kansas City’s largest employers, but jobs are also available in other fields like healthcare, education, and financial services. Riverboat casinos, art museums, and family attractions like Legoland offer ample entertainment opportunities for young families.

The state capital of Oklahoma, Oklahoma City (OKC) features employment opportunities in fields like finance, manufacturing, and oil & energy. OKC is also home to Stockyards City, the largest cattle market in the world. For entertainment, OKC hosts multiple festivals every year and has a growing arts and culinary scene. At $69,551, Oklahoma City has the lowest median income on this list for married millennials. Fortunately, because of affordable home prices, the homeownership rate still outpaces the national average. In Oklahoma City, 74.8 percent of married millennials have children, the highest percentage on this list.

Salt Lake City has the highest percentage of married millennials on this list. Culturally, Salt Lake City is the headquarters of the Church of Jesus Christ of Latter Day Saints and contains architecture and institutions related to the church and its history. For those who enjoy outdoor activities, the greater Salt Lake City region features ski resorts, national parks, and the Great Salt Lake itself. Job prospects in Salt Lake City are also positive, with employment in trade, professional services, and government.

The data used in this analysis is from the U.S. Census Bureau 2017 American Community Survey PUMS. For the purpose of this analysis, millennials are defined as respondents between the ages of 21 and 36 in 2017.

Metropolitan areas were sorted and ranked by their millennial marriage rate—the percentage of all millennials currently married (not including separated). In the event of a tie, metros with more total married millennials were ranked higher.

Only metros with a population greater than 100,000 were included in the analysis. Metros were grouped into the following categories based on population: