Funeral director Sarah Wambold shares her advice on burial options and offers tips on making your final wishes clear for your loved ones.

Growing up in Wisconsin, Sarah Wambold lived in the kind of town where there was only one funeral home. So when someone died, almost everybody knew the deceased. This, along with time spent working at a nursing home during high school, gave her a perspective on life and death well beyond her years. That’s why, as she told us, “I have always wanted to be a funeral director, even as a young person.” Now in her 30s and based in Austin, Texas, Wambold is living out her childhood dream — she is a licensed funeral director and embalmer, with a special focus on green burial, which emphasizes environmental sustainability. Green burials usually use biodegradable coffins and the bodies are neither cremated nor prepared with embalming fluids.

She got her license immediately upon entering the workforce after apprenticing at a progressive funeral home in Milwaukee. She moved to Texas when she was 21. “Austin was just up and coming at that point,” she said. “It turned out to be a good place to land. A green burial place here had just got started, which worked out well for me.”

Wambold is an early member of The Order of the Good Death, an organization devoted to facilitating conversations about death, with an intended audience of those in the industry, as well as anyone who might experience death (which is to say, all of us). It does so through events held around the country, as well as an extensive online database of resources for people interested in a more modern, death-positive approach to the inevitable. (They also help connect reporters with sources for articles like this one.)

Wambold spoke to us about her experience with green burials, how millennials plan (or don’t) for their own funerals, and the importance of placing death at the center of our cultural conversations. 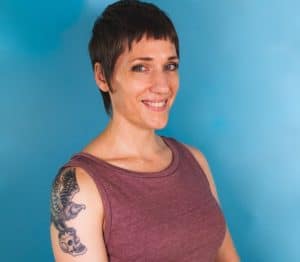 Let’s start here: Why do you think it’s important for people to think about and discuss death? What are the benefits of having these conversations?

I think it is important to give ourselves as many opportunities as possible to let go of our egos and accept the present moment for what it is. Thinking and talking about death does this. It helps us process our feelings so that we are not acting in fear of them, which can be harmful. When we share openly about death, we give ourselves a chance to make deeper connections with people because death touches us all.

How did you become interested in funeral services in general, and green burials specifically?

The place I apprenticed at in Milwaukee wasn’t green per se, but they created a new business entity for direct burial and direct cremation market. [Editors’ note: Direct burial and cremation bypass both funeral homes and embalming, which usually lowers the cost of those services.] They knew there was a whole market they weren’t reaching. Those were considered progressive for the time. I felt a similar spirit in Austin. I was sort of raised to do things differently.

Well, you do describe yourself as “anti-establishment when it comes to funeral service.” I’d imagine a lot of people our age are interested in a different type of funeral service, just like many of us wanted a different kind of wedding than our parents or grandparents had. What have you heard from people in their 30s who are thinking about what to do with their bodies after they die?

Unfortunately, I don’t hear a lot of things based in reality. My contemporaries in their 30s, I hear ‘I don’t want to think of it.’ Or ‘I want a viking burial,’ deflecting the seriousness. I do hear people caring about the environmental impact—they’re drawn to cremation because they don’t want to take up green space. I’m not convinced that as many people will act on green burials as express an interest in it. And there’s also the people who want to donate their body. I hear that one pretty frequently, too.

You’ve also written extensively on the topic. Why is it important to you to spread the message of green burial?

Well, it started because I didn’t see any of my experiences reflected in journalism or even in fiction. My background is in literature, and I was determined to show people the reality of what it’s like to work in death care, and what these choices are all about. I just wanted to see it there. And that still is my reason behind it. But also people are really hungry for this information. When they’re curious, they deserve to have good and accurate information. It’s forever interesting to me.

What are the advantages of a green burial — besides, you know, the obvious?

What I’ve witnessed and experienced is that people tend to have a better relationship with the [burial and funeral] process. You have to do hands-on planning because it’s not as accessible as walking into a funeral home and ordering up a green burial. And doing that helps people put their energy and grief toward something constructive, which helps. People who choose it really want it. It means something to them. The satisfaction that you buried someone in a way, and in a spot, that’s meaningful to them, it helps so much.

What are some common myths you encounter?

The big ones are that bodies contaminate the earth. Or that they’re dangerous without a container around them. Dead bodies are harmless. People think they’re going to poison the ground, and that the toxins are going to kill the wildlife around it. Nature’s a pretty complex system, and it can filter out the harmful stuff. [People think] it will contaminate the water table, which is not true. Most cemeteries are not on water.

And a final myth is that you can’t have a green burial. A lot of people think it’s illegal, or not available. It’s legal in every state. You might have to work for it, but it’s legal.

Common: Can I get buried on my own land? Is it legal?

Uncommon: At a green burial, people often ask if they can leave non-natural—like plastic—memorial items, and typically that’s not allowed.

Really uncommon: Can we share a plot? Like, two to a grave? Can I be buried with my animal? And that’s really at the discretion of the cemetery.

How can people make their wishes clear?

I suppose the most concrete way is to do a pre-plan, if that’s available, where you buy the service in advance. I’m not going to say whether that’s good or bad, but that’s the most concrete: signing a contract. Having it in writing makes a big difference. Wills don’t necessarily deal with the body, but your advanced directives and that sort of documentation will carry a lot of weight. And then telling people, whoever your next of kin is, what it is that you want. With a green burial, it’s helpful to give someone complete directions on how to complete that task in advance. It’s hard to have a green burial without planning.

Legally speaking, it’s still state by state in terms of what can or can’t be done. What kinds of laws would you like to see adopted universally?

I would say there is a law that exists in about nine states right now that requires families to work with a funeral director in the event of a death. I would like to see that removed from the states because that would give people a lot more freedom to do a home funeral, or remove a cost. Like, they could file their own death certificates and things.

How did you connect with The Order of the Good Death?

Caitlin [Doughty, founder] and I were roughly the same age. We found each other through our private WordPress blogs. Facebook hadn’t taken off yet. I was just looking for people like me. Young women in the industry. We found each other and emailed. I’m one of the first four.

Are there any movies, books or other pieces of pop culture that you feel like depict the process well? I’d imagine Six Feet Under has both fans and detractors within the industry.

This is the number one question I get: Did I watch Six Feet Under? That was such an incredible depiction, and it really did a great job of depicting the industry. Some of the nuances. Families getting bought out. I’m still shocked at how well it did that.

Louis Wilson is a freelance writer whose work has appeared in a wide array of publications, both online and in print. He often writes about travel, sports, popular culture, men’s fashion and grooming, and more. He lives in Austin, Texas, where he has developed an unbridled passion for breakfast tacos, with his wife and two children. This article is sponsored by Haven Life Insurance Agency.

Haven Life Insurance Agency offers this as educational information only. No endorsement is implied of the ideas expressed here.